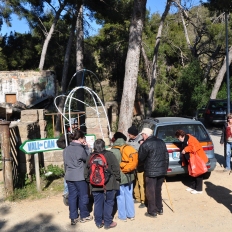 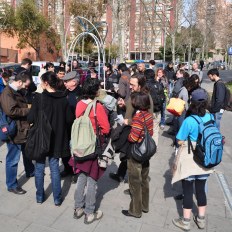 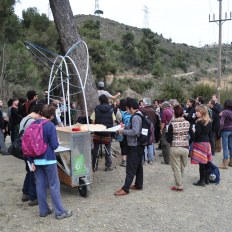 From “Together We Design: Landscape Architects offer their best techniques for Transactive Form-making.” – project by Raons Públiques, Barcelona Spain

Carrito is the Spanish equivalent of the French charrette, now more associated with public workshops than the carts used at the École des Beaux Arts to collect drawings to present final designs to experts. Today’s institutionalized charrette process involves experts and the public (NCI, 2015; Sanoff, 2000). Although charrettes typically take place in the communities their projects affect, participation is seldom representative. Furthermore, inviting neighbors to participate in a process tightly orchestrated by experts gives a false sense of empowerment. The carrito is an innovation that adds another dimension to community outreach. It is simply a cart that designers take into public spaces. Instead of inviting people to a controlled charrette, the carrito engages people within their daily routines by meeting them where they are—on their way to work or lunch. It is a small movable object adaptable to local conditions—an architectural curiosity, an art piece that attracts people because it is out of the ordinary. In a location that slightly disturbs but becomes part of the community’s rhythms, on the edges of the flows of everyday life, it can be deployed on a temporary basis, or repeatedly. It allows users to display drawings or even games. It penetrates beyond the “usual suspects” that appear in most charrettes. Most importantly, it flips the tables, taking experts out of their comfort zone and opening new ways for them to understand the communities they are acting within.

Instructions:
Making a carrito expresses one’s attitude to form-making, requiring some construction skills, but allowing every member of a design team to contribute. Consider the project a team-building exercise. Guidelines regarding size, materials, features, and aesthetics are not hard-and-fast rules but a starting point. The size of the carrito should reflect its objectives, the scale of spaces it must command, and the ability to transport it easily: a small rolling suitcase or a large trailer. The carrito has wheels; it moves without falling apart. Materials reflect the builders’ expertise, but should be lightweight, sturdy, and easily replaced like bicycle parts. Consider its kinetics: closed and open. Closed, it should occupy little space. Open, it may unfold to provide a tabletop, pin-up space, storage, signage, or shade. One of the carrito’s main purposes is aesthetic—to stand out, well designed and crafted evoking curiosity or wonder. Avoid making it too polished. An imperfect object may be more approachable to passers-by. Using recycled materials assembled in an understandable manner says that locals create public space best. But the carrito does not create community engagement on its own—it is not a drone. The opportunities it creates—to observe behaviors, to hear local stories—require designers to spend extended periods of time in a community, rather than looking at it remotely. Take the carrito to the project site, to popular public spaces, to parking lots, wherever people are. Placement is critical: position it at the edges of pedestrian activity, where it can slightly disrupt without impeding flows. Display useful transactive props—maps, models and photos of the community. Add flyers for community events, distribute surveys, or conduct unstructured interviews. Take notes, draw, diagram, paint, smile, and listen to what the community tells you.

Case Story:
For the activist group in Barcelona, Raons Públiques, the carrito expresses a commitment to empowering communities to make their own public spaces. I worked with the group as a participant observer and continue to communicate with them as an activist scholar. The group includes environmental designers, anthropologists, sociologists and educators dissatisfied with the city’s urban planning model. Raons’ work emphasizes diagnosis and dialogue—knowing a neighborhood in order to design its spaces transactively (de la Peña, 2013). Raons Públiques built a prototype carrito to stand out, enliven public space and invite dialogue for a workshop in France. Raons group member Carlos explains: “the carrito has more use when you set it loose and learn from what happens. It’s not just an intention of transforming. Every element when you project it into space transforms the space, but in a social way, to generate participation.” The object itself is an odd box on three wheels, sheathed in translucent ribbed plastic and painted wood flaps that transform into tabletops with the help of a hacked tripod.

The carrito is used often, rolled into public squares as a temporary kiosk to distribute information, to play games about public space, to interview neighbors. At meetings and workshops its quirky design has disarming effects, attracting children and seniors alike, engaging hundreds of people in design discussions—people who would have otherwise never come to a charrette. In 2012 the city of Barcelona announced a competition to “improve” car mobility and access to Collserola Park; most teams responded with structured parking and aerial trams. In contrast, we, the Raons, brought our carrito to the working class neighborhood targeted for “improved” access. At the bocce courts where parking was scheduled to destroy their community space, elderly users expressed nervousness about the influx of more cars. Our “carrito sessions” produced a counter-proposal that was named a winner in the city competition. The massive access project was scuttled; community space was saved.

Reflection:
Carritos abound in many variations from food-like-carts in Medellín that make everyday spaces slightly unfamiliar, to collectives in Madrid who hack public space by teaching citizens to make urban furnishings from found objects to provoke suspension and elicitation as a performance of use (Lab 2012; Corsin Jimenez, 2013). The carrito functions at multiple levels—as an embodiment of a participatory design philosophy, an object that evokes dialogue, and a reminder that small gestures create humane public spaces. It does not replace other useful engagement tools, but the diversity of publics demands a diversity of approaches. Taking the charrette to the people is a participatory experiment with a great deal of promise.

I am a professor, architect, & community designer. I live in Davis, CA and teach landscape architecture and community development at UC Davis.
View all posts by ddlp →
%d bloggers like this: