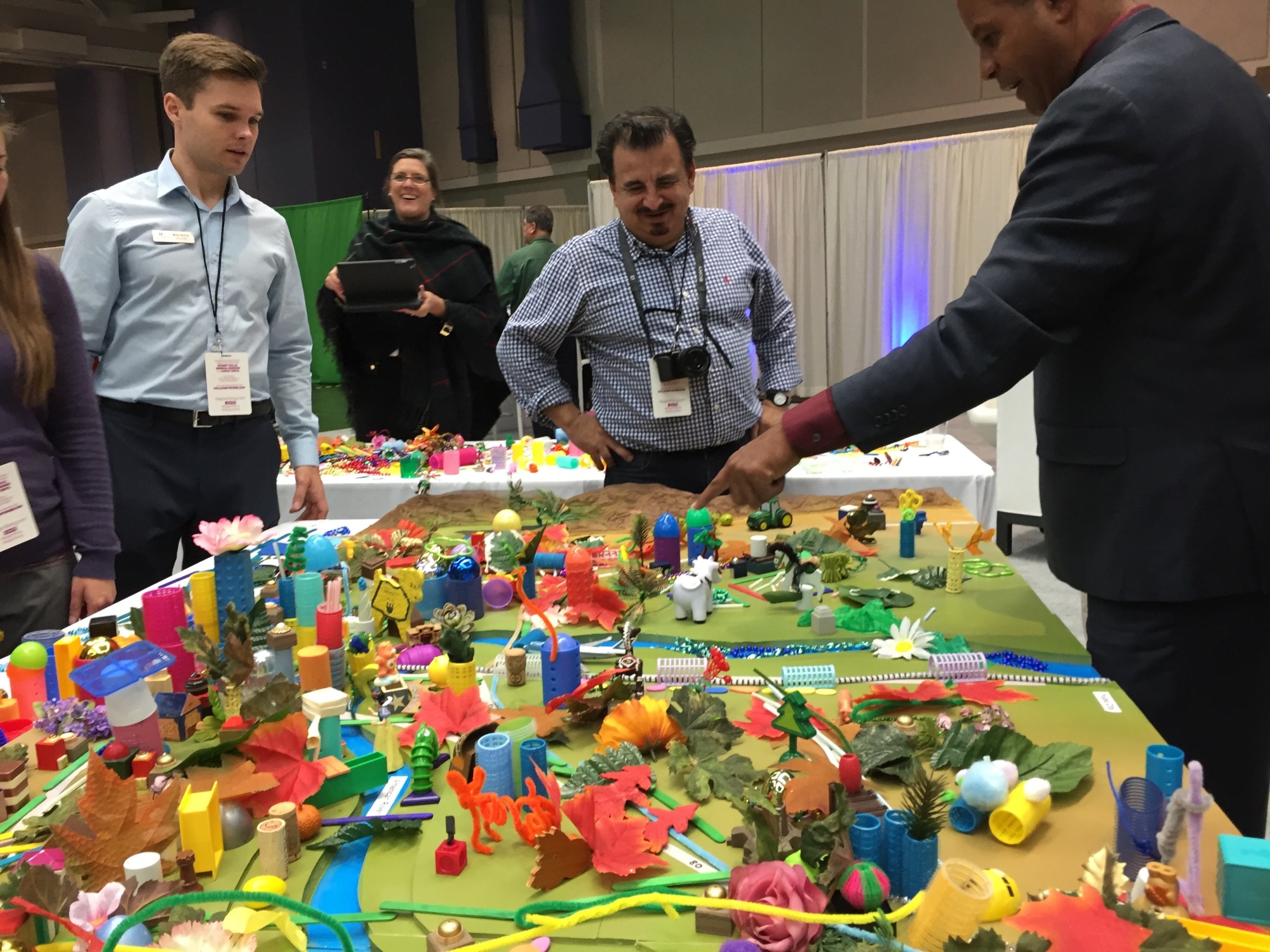 Envisioning a Region
It’s not easy for people to envision the region the live in, but if planners expect citizens to meaningfully participate in shaping it, that is exactly what needs to happen. The Sacramento Rising Interactive Model was designed to do just that—to collectively describe the existing diverse landscape and to imagine its future.

A four by eight-foot model became the basis for this process at the 2nd Region Rising Conference, sponsored by Valley Vision and the Sacramento Area Council of Governments (SACOG). The model represented the SACOG region, which includes the six counties of El Dorado, Placer, Sacramento, Sutter, Yolo and Yuba. Rather than print out a large map of region, a hand-crafted model became a three dimensional landscape painting designed to capture the region’s beautiful visual and spatial nature. 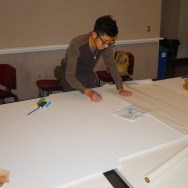 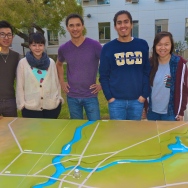 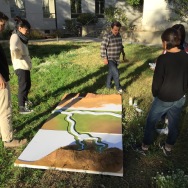 Like an art piece the model was a conceptual representation of the region, enticing participants to engage, imagine, and touch. The region’s rich geography of hills, mountains, plains, and rivers was painted like a canvas to mimic the region’s greens, browns, and warm golden colors. In addition the regions cities, buildings, and highways were highlighted.

What started as a letter-sized map of the region transformed into a beautiful model in four short hours with the help of U.C. Davis’ Professor David de la Peña and his landscape architecture students. The most difficult part of the process was representing the vast 100-mile wide region so people could quickly recognize it as their own, and to make it tactile so as to encourage them to interact with it. Unlike most planning maps, the model was not about accuracy but rather a way to communicate and reflect on the region’s future.

To create the model, students first had to abandon their tendency to jump to the accuracy of GIS and Google Earth and to embrace a conceptual, messy, artistic process. Professor de la Peña skillfully suspended the students’ judgment through his enthusiasm and knowledge of the region, while James Rojas captured their attention through a magical transformation of foam board, construction paper, cellophane, metal window screen, glue, pins and spray paint. The final model fits on top of two standard folding tables. It is lightweight so it can be transported easily and installed in less than 15 minutes.

The Engagement Process
The Sacramento Rising model was placed in the exhibition hall for the Region Rising Conference and caught the attention of hundreds of curious attendees who discovered the model encircled by discarded plastic toys, buttons, and scraps. These materials were placed there to spark people’s imagination and prompt them to articulate narratives and ideas about their life in physical terms through the miniature forms they would create. As part of this facilitation process with the public James asked them to “build their ideal Sacramento region.”

Using these alien yet familiar objects, participants created utopian vision of the region based on their on-the-ground knowledge and their imaginations. The model gave participants a new way to visualize, understand and for a moment give them control over the vast their region through creative inquiry. 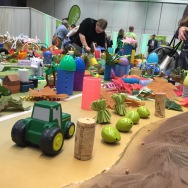 The first question that most people asked was “where do I live or work?” Once they located that place the inquiry began. Buildings and objects were not adhered to the model, thus people were be able to place them anywhere they chose. The model made it possible for the public to investigate the visual and spatial landscape of the region in a direct way, with their bodies and hands, changing their viewpoint and posture, focusing and standing back, touching and changing things. Through this process new ideas and opportunities emerged that weren’t visible at the beginning. New connections were also easily made. One conversation was struck up between people commenting on a new shopping center development; another between a city council member and a community garden activist. The model itself became a site of political expression and debate.

Maps on walls are useful but limited tools. Locked into their conventions of scale and iconography, they offer few ways for non-planners to imagine and engage without constraints or preconceptions. Once brought into a fun and judgment-free process, participants can better engage. They begin to offer suggestions, commentaries, and to articulate desires that were otherwise inaccessible.

Conclusion
Urban planners instill a kind of order and accuracy across the built environment, and conventional public engagement and community visioning often fails to find ways to imagine outside of the existing order. Meanwhile, the lives of a region’s citizens are messy, and everyday landscapes are the product of millions of desires manifested throughout the landscape, made up of impulses and improvisation. The Sacramento Rising model was designed and implemented to capture the inaccuracies and messiness in their lives that give places meaning. It directly involved participants (as opposed to “audiences” or passive viewers) in a collaborative process, mimicking the dynamic and collective nature of life in a region. It provided a model for how a varied group of players—strangers, neighbors, friends—can interact to enhance a region’s sense of place.